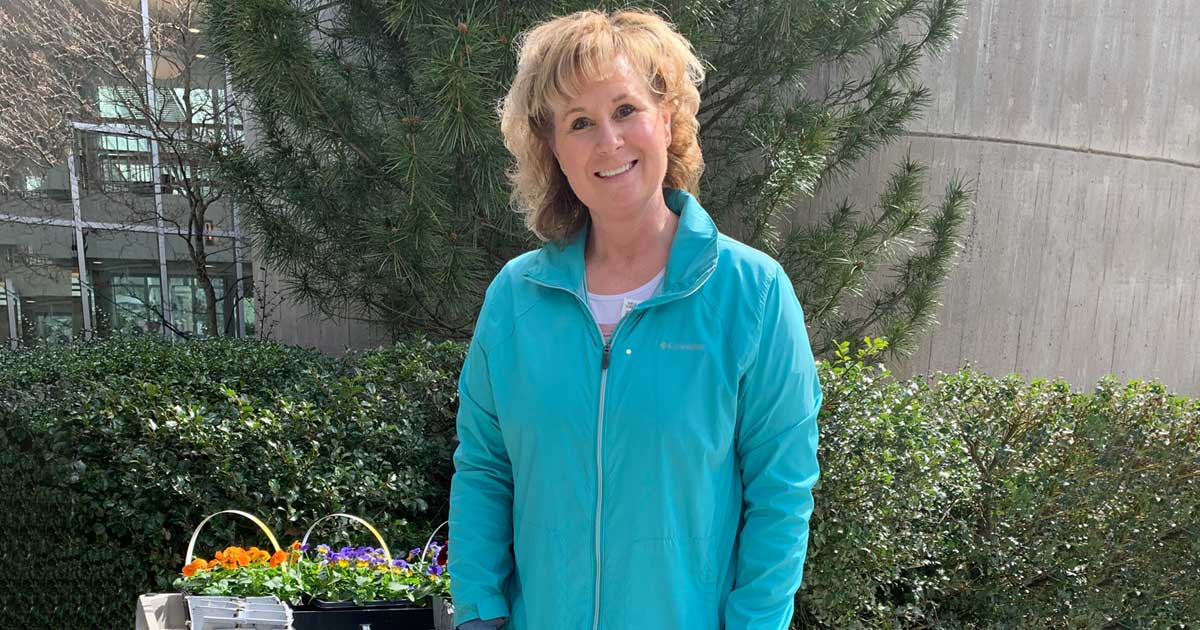 April is National Volunteer Month. McLean is happy to join in the celebration, lauding the work of our many volunteers, including the members of the McLean Auxiliary. Founded in 1972, the McLean Auxiliary, along with other volunteers, is an incredibly dedicated group. The group’s work demonstrates a level of support that for the past 50 years has had a profound and direct impact on the life enhancement, support and wellness of McLean residents, as well as their families and team members.

Due to the pandemic, most volunteers were unable to serve on campus for the past two years. But just in time for National Volunteer Month as well as this summer’s opening of the new Goodrich building, the volunteers are allowed back on campus and finally able to resume the work that means so much to so many.

According to Rebecca May, past president and current board member of the McLean Auxiliary, “I’m really excited about the fact that with new residents moving into The Goodrich building, we’ll be able to find out what those residents like to do and how can we involve them. We all need to feel needed.”

Given the responsibilities members of the McLean Auxiliary, along with other volunteers, have taken on through the years, it seems their reach is continually expanding. As it is, Auxiliary members already run the two gift shops on the campus, one of which will be relocated to The Goodrich when it opens. They also host membership socials and fundraisers throughout the year, including casino nights for the residents. The Auxiliary even runs an annual scholarship program for employees and their children pursuing post-high school education in a medical or healthcare-related field. And if all that wasn’t enough, they also supply flowers for all major (and some minor) holidays.

McLean is also fortunate enough to have many other groups of volunteers, including memory care volunteers who support residents in the community with Alzheimer’s and other forms of dementia. There are also hospice volunteers, those who deliver Meals On Wheels and many others who assist in countless other ways on campus.

“One of the activities I got to lead,” Rebecca says, “was where we would get DIY (do it yourself) bunches of flowers from stores and work with residents to make floral arrangements to put around the dining rooms. We would do those for different holidays — Mother’s Day, Christmas, Valentine’s Day, St. Patrick’s Day — Oktoberfest. It’s a way for residents to get involved, as well as a nice way to brighten the campus.”

So, just who are the members of the McLean Auxiliary? “Anyone can join,” Rebecca remarks. “I got involved with McLean when my mother-in-law moved into the Health Center almost nine years ago. When she became a resident, I was asked if I would become part of the Auxiliary Board. But the volunteers include everyone from current and former employees to residents, family members, friends and even neighbors.”

The McLean Auxiliary is financially supported by membership dues, fundraisers and both gift shops. Aside from the educational scholarships, the Auxiliary also awards annual grants to support residents’ services and quality of life activities. Grants are even given for residents’ special needs, such as haircuts, personal items, eyeglasses, life enrichment activities and entertainment programs, as well as equipment that enhances patient care.

And now that volunteers have returned to the McLean campus, what does an experienced volunteer like Rebecca see for the future? “I’m really excited,” she says. “I’m hoping that by September, things will have returned to normal enough that we can have a Gala Social in The Goodrich, inviting existing Auxiliary members and residents to hear about the Auxiliary and our vision for the future. We want to generate some excitement.”

With so much to do, especially after an almost two-year hiatus, you might expect the members of the McLean Auxiliary to be somewhat overwhelmed. Speaking to Rebecca, however, you wouldn’t know it. “Obviously, things have changed,” she states, “but there’s so much we can do. I think the most important thing a volunteer can do is just keep your eyes and ears open. Discover a need, and then do your best to meet those needs.”

As we celebrate National Volunteer Month, one thing becomes clear. With the continuing sense of optimism and commitment demonstrated by those who give their time to volunteer at McLean, including the members of the McLean Auxiliary, a helping hand is always available to both residents and staff. It’s the passion and willingness of those who volunteer to work tirelessly on behalf of McLean that demonstrate quite clearly the contribution and difference a dedicated group of volunteers can make.

For additional information on the McLean Auxiliary & how you can join, click this link.