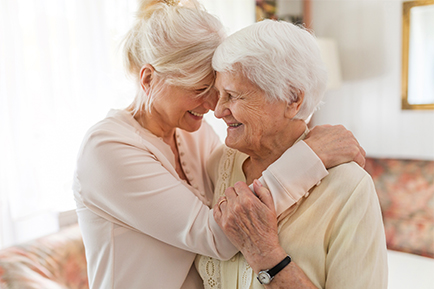 Understanding the 7 Stages of Dementia

It’s usually a friend or family member who notices first. A loved one is forgetting things they shouldn’t be. Bills are going unpaid. They’re getting lost while driving. Something’s just not right.

Worrying about someone you love progress through the different stages of dementia takes an emotional and physical toll on everyone involved.

Alzheimer’s and other forms of dementia affect each person in different ways, but they’re progressive diseases that develop slowly and worsen over time. Some people can stay in the early stages of dementia for a long time, while others seem to develop every symptom at once. On average, a person with dementia lives 4 to 8 years after a diagnosis, but some live as long as 20 years.

According to Dementia Care Central, a resource center for dementia caregivers, health professionals commonly use the Global Deterioration Scale for Assessment of Primary Degenerative Dementia (also known as GDS or the Reisberg Scale) when discussing the stages of a person’s dementia or Alzheimer’s progression.

Becoming familiar with the typical 7 stages of dementia can help you and family members better understand what to expect and plan for the future. The dementia stages below give an overall idea of how symptoms change over time and should only be used as a general guide.

What Are the 7 Stages of Dementia?

In Stage 1, also referred to as no cognitive decline, dementia is undetectable. The individual is mentally healthy and functions normally. There are no evident signs of memory impairment, behavioral problems or any symptom associated with the onset of dementia.

“Very mild” are keywords here. In Stage 2, there will be the normal forgetfulness typically associated with aging seniors. However, the symptoms of dementia aren’t usually apparent to you, your loved one or their physician. Symptoms include:

Stage 3 is where you may begin to notice symptoms of cognitive decline. It may not have a major impact on your loved one’s day-to-day life, but it’s crucial to recognize the signs for early diagnosis and intervention. Common symptoms include:

Stage 4 is where a loved one is considered to have early-stage dementia, also called moderate cognitive decline. They should be seeing a health care professional who can diagnose the early stages of dementia during an exam.

From here on, caregivers and family members should become actively involved in the life of their loved one. A daily care plan should be implemented, with adjustments made as necessary to provide the right care. It’s also when future care needs should be considered, including researching senior living communities that offer specialized memory care, such as McLean.

Symptoms of early-stage dementia include:

With Stage 5, signs and symptoms of dementia will become very evident. Your loved one’s short-term memory will be mostly lost, and they’ll need more help with activities of daily living (ADLs), such as bathing, dressing and meal preparation. Stage 5 lasts on average 1.5 years, and will require in-home health care for your loved one or a move to a senior living community, such as McLean, that provides high-quality, person-centered Memory Care.

Also referred to as middle dementia, Stage 6 marks a period in which your loved one will need substantial caregiving for most day-to-day activities. They may forget your name and those of close friends and family members. They may have little memory of both recent events and personal history, such as where they went to high school or when they got married. They may also experience significant personality changes and begin behaving inappropriately in social settings. And some individuals entering the last stages of dementia begin having trouble controlling their bladder and bowels.

On average, Stage 6  lasts around 2.5 years, and common symptoms include:

In this last stage of dementia, symptoms are severe and 24/7 care will be needed, with a focus on providing comfort and quality of life.

Your loved one may have major issues communicating and eventually may not be able to communicate verbally at all. Memory loss worsens and they may lose the sense of where they are in time and revert to their childhood. They’ll require extensive assistance with all activities of daily living, and may lose their ability to walk and become bedridden. They’ll also become vulnerable to infections, including pneumonia.

Severe cognitive decline can last up to 3 years and symptoms include:

The Right Care at the Right Time

Early diagnosis can help your loved one live the most enriching life they can for as long as possible. It’ll also help you to better plan for the future.

And you don’t have to go it alone.

To help people like you touched by Alzheimer’s or other forms of dementia, McLean offers comprehensive memory care on our campus and around the community. Support groups provide a comforting, understanding place where you can express your feelings, share caregiving ideas, and learn about advances in research and advocacy. We also offer a social model adult day program that provides those with dementia  a full array of engaging activities, physically and mentally stimulating programs, and social connectivity while giving their caregivers respite throughout the day.

McLean Assisted Living was presented with the very first Purple Flag in the state of Connecticut, in recognition of outstanding dementia care. Here on our nature-filled campus, your loved one will be cared for by a highly trained team, including  CNAs certified in dementia care by the Alzheimer’s Association. It’s a stimulating, enriching environment with the compassionate support your loved one needs to remain as independent as they can for as long as possible.

To learn more about the different stages of dementia and how McLean can help ease the symptoms of cognitive decline and empower your loved one to lead an engaging, fulfilling lifestyle, visit our Memory Care page.