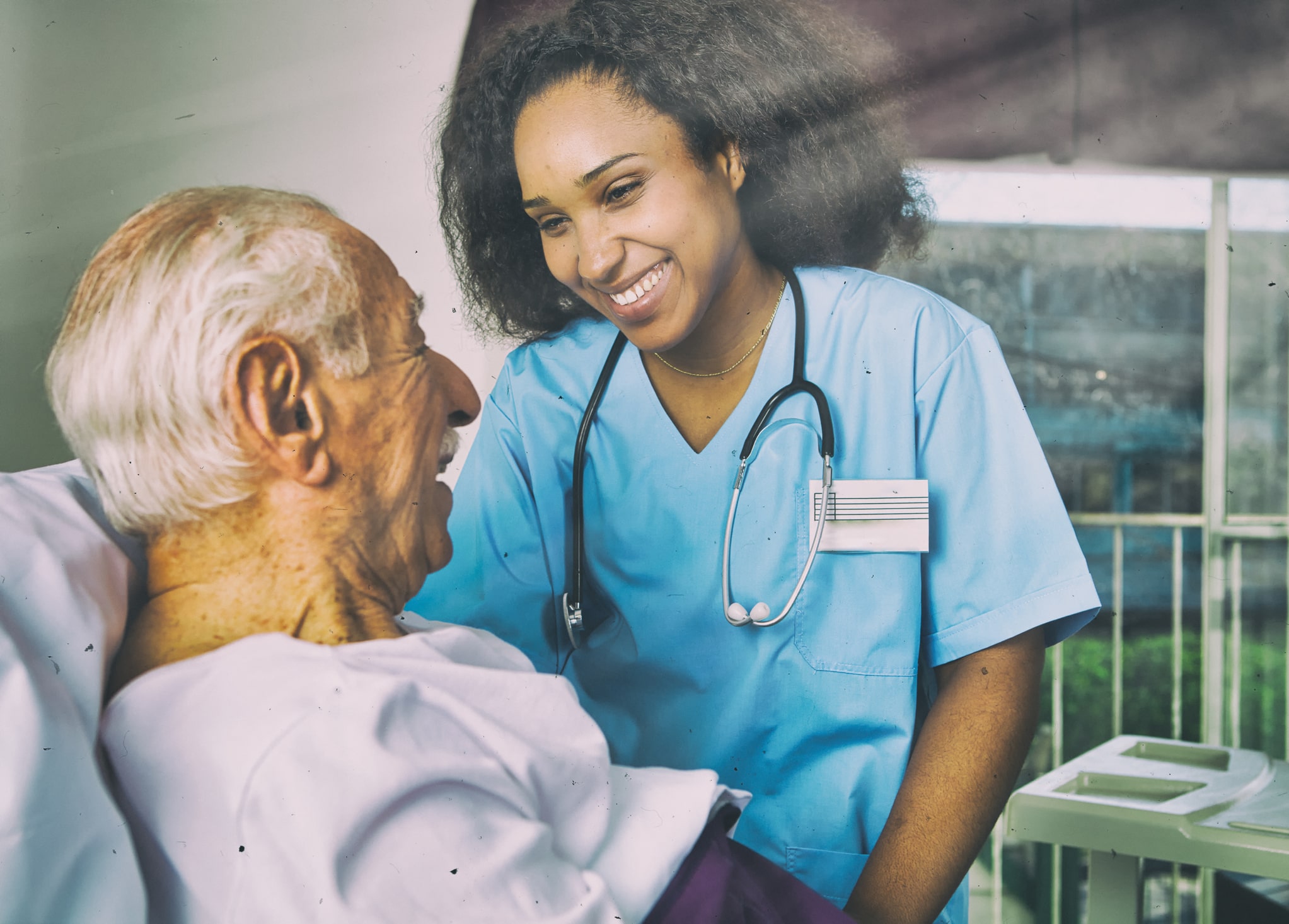 Alzheimer’s — There Is Help

Each June, countless volunteers, organizations, caregivers, and communities work together to increase awareness for Alzheimer’s and other types of dementia. The observance that started nearly 40 years ago is just as relevant today, if not more so, with millions of Americans affected. Would you be able to recognize the symptoms? Do you know where to turn for support? To assist seniors in living their best lives, as well as giving a sense of hope and understanding to the families of those whose loved ones have been diagnosed with Alzheimer’s or some form of dementia, we’ve compiled the following information.

“Alzheimer’s Disease” which has been a recognized diagnosis since 1910, is a form of “Dementia.” And, as with other forms of dementia, Alzheimer’s is not considered a “normal” part of the aging process by medical professionals. “Dementia” is an umbrella term used to describe the symptoms of severe memory loss and cognitive decline that inhibit daily living.

The symptoms of dementia include both short and long-term memory loss; difficulties with thinking, problem-solving and language that are severe enough to affect a person’s ability to perform everyday activities; distinct and obvious changes in mood or behavior. While the symptoms for Alzheimer’s disease mostly overlap with other types of dementia, there can be some differences. To begin with, other dementias can focus more on certain symptoms, and less on others. In the case of frontotemporal dementia, changes in personality are more apparent in the early stage, while memory decline often doesn’t arise until the later stage.

Over the past few years, medical science and technology have made great strides in the diagnosis and treatment of dementia in the earlier stages. Unfortunately, as the disease progresses, we still haven’t reached the point where medical science can effectively treat it, let alone stop it.

Additionally, while organizations like the Alzheimer’s Association are doing their best to educate the public, there’s still much confusion attached to the diseases falling under the dementia umbrella, as well as the stigma attached to people suffering from the various forms of associated disorders. Terms like “losing it” and “senior-moment” are frequently utilized, especially by people who don’t understand that the problems caused by dementia are not the fault of those suffering from these disorders.

According to Alzheimer’s Association Volunteer Advocate and Walk to End Alzheimer’s Grand Champion, Natalie Ziemba, “Alzheimer’s, or any form of dementia for that matter, still comes with a stigma attached. Being ‘senile,’ or having an ‘episode,’ is still common nomenclature for this older generation. My hope though, is this type of terminology will soon dissipate as the next generation (Gen X) becomes the largest population of caregivers.”

Here’s the reality, courtesy of the Alzheimer’s Association. Worldwide, there are 55 million people living with some form of dementia, six million of them Americans. One in three seniors dies of Alzheimer’s or some other form of dementia. Every year, Alzheimer’s kills more people than colon and breast cancer combined.

These numbers affect not only family, but friends and other relatives of the person diagnosed. Currently, it’s estimated that more than 11 million people in the United States help provide care and support to Alzheimer’s patients, providing more than 16 billion hours of unpaid care. Also of concern, in 2020 alone, COVID-19 contributed to a 17% increase in Alzheimer’s and other dementia deaths. Another troubling statistic, according to Ziemba, is the fact that “almost two-thirds of Americans with Alzheimer’s are women. That’s a staggering figure.”

How To Recognize the Signs

So how does one know if a loved one is suffering from some form of dementia? And where can you go to get support? When a loved one’s memory, emotions, and behavior start to change, becoming erratic and confusing, it can be incredibly overwhelming for family and loved ones. This can be especially true in the early stages of dementia, when you’re never quite sure who you’re going to find when you visit a friend or relative who’s been diagnosed. Changes in behavior, memory, eating habits, vocalization, and verbalization are just some of the signs to look for. For caregivers, a loved one’s emotions and behaviors may seem confusing and overwhelming at times. What do you do when your mother or father no longer recognize you? What do you do when you feel you have no one to turn to for help?

“There’s a very robust online community of support,” says Ziemba. “These can all be found on the Alzheimer’s Association’s website. There’s also a really wonderful resource and the place I tell most people to start — the Alzheimer’s Association’s 24/7 Helpline. This is a must. Those who are concerned or, in the back of their minds thinking, I’m noticing some changes — maybe my wife, husband, aunt or uncle, grandma or grandpa, may be suffering from Alzheimer’s. My recommendation is to go to the helpline first. It’s staffed 24 hours, seven days a week. The phone number for the Helpline is 800-272-3900.”

Additionally, The National Institute on Aging offers an array of links where both patients and caregivers can find a wealth of information, care and support on Alzheimer’s and other forms of dementia.

Fundraising is also an important part of the Alzheimer’s Association’s work. June 21st, also known as the summer solstice, because it’s the longest day of the year and there’s more light than on any other day has one other special feature.

Thanks to the efforts of the Alzheimer’s Association, on The Longest Day, thousands of participants from across the world come together to fight the darkness of Alzheimer’s through an activity of their choosing. The creativity and passion of these participants are utilized to raise funds and awareness for the care, support, and research efforts of the Alzheimer’s Association. McLean participates in these efforts to educate the public about dementia by bringing in guest speakers, making book recommendations and participating in community activities.

Additionally, the Alzheimer’s Association also sponsors the Walk To End Alzheimer’s. “The Walk is the largest fundraising effort, nationwide, for the Association,” says Ziemba. “It’s held annually with more than 600 communities hosting walks. Many people bring friends and family — they’ll bring their dogs, kids in strollers and wagons. It’s a walk to remember those who’ve passed, honor those who are still with us, and just celebrate the lives of those who’ve been diagnosed. It’s also the world’s largest fundraising event to raise awareness and funds for the Alzheimer’s Association. That funding goes toward Alzheimer’s care, support, and research.”

That brings up another point Ziemba believes is important about the Alzheimer’s Association’s work. “79% of all the money raised goes directly to Alzheimer’s care, support, awareness, and advocacy efforts. That’s a huge number. 17% goes back into fund-raising efforts, and only 4% is used administratively.”

So where does the fight against Alzheimer’s and all other forms of dementia go from here? “Hot off the presses,” says Ziemba, “Congress just agreed to spend $289,000,000 for Alzheimer’s research funding. That’s an increase of $289,000,000 — they’re investing in the Alzheimer’s public health infrastructure at the National Institute of Health (NIH) for the fiscal year 2022. The bill also includes $25,000,000 to fund and implement the Bold Infrastructure for Alzheimer’s Act.”

With the Federal government, working together with the NIH, finally involved in the fight against Alzheimer’s and other forms of dementia, advocates now believe there’s a fighting chance to make real progress in defeating this insidious illness, allowing seniors to enjoy their golden years, and live them as fully as possible.

Here at McLean, comprehensive memory care is available on our campus and around the community. Support groups provide a comforting, understanding place where those with memory problems can express their feelings, share caregiving ideas, and learn about advances in research and advocacy. We also offer a social model adult day program that provides those with dementia a full array of engaging activities, physically and mentally stimulating programs, and social connectivity while giving their caregivers respite throughout the day.

To learn more about the different stages of dementia and how McLean can help ease the symptoms of cognitive decline and empower your loved one to lead an engaging, fulfilling lifestyle, please visit our Memory Care page.

For additional information or to get involved with the Alzheimer’s Association, please visit their website.